Today we had our first expedition to visit the Wuzhen water village. Along our way to the village, we saw beautiful Chinese architecture and saw the Jinghang Grand Canal. The Grand Canal was built thousands of years ago to connect South and North which allows fast transportation of goods in ancient China. Although it serves an important role in transportation, it brings some ecological problems such as introducing invasive species and constantly removing sediments. The Grand Canal is a great example of human taking advantage of vast water network. After passing by the Grand Canal, we also saw a power station that is powered by burning fossil fuels. In order to protect the environment, the government have cut down coal burning in the past decades, especially in populated area. Nowadays, the Jinghang Grand Canal aids in the transportation of water from the South of China to the North, where a shortage occurs.

We made it to the water village and after a few pictures with the locals, ventured inside. We divided into small groups to tackle the beautiful village. Wuzhen village was built on water networks. The water network within the village allows the people who live there, access for transportation, laundry, and a sewage system. It has become a very popular tourist attraction due to its unique design. The traditional buildings in the village have black roof tiles and white walls. To aid with ventilation, people built their house with gaps in the roof thus air can pass through easily. The river running through the village seems to be polluted by human. The water was turbid and appears to have a lot of algae due to rich nutrition from human activities. Other pollutants are heavy metals and human litters. Within this village there were many museums, a school, a temple and lots of local cuisine to choose from. YUM! We were all happy to be back on the fresh, cool bus after being outside in the hot sun and on our way for lunch. We tracked through a local kitchen and after a few twists and turns made it to our table at Grandma’s Kitchen. The food was scrumptious!

Once we arrived at the hotel we had some time to relax and freshen up. We spent the evening working on our group projects, giving formal introductions and having a discussion with the professors about the impacts human development has had on the water resource in China. Overall it was a wonderful and enlightening day and we are excited for what the rest of the week has to offer! 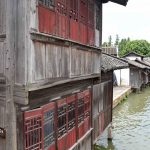 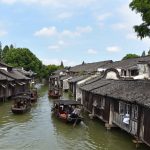 Tourist boats in the canal running through Wuzhen 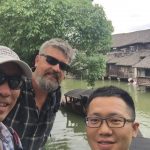 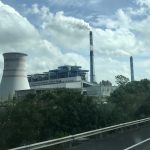 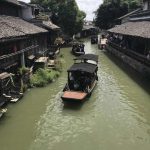 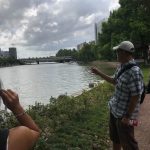 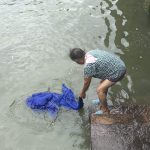 Doing laundry in the canal at the village 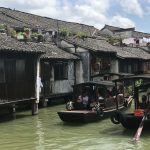 Another view of architecture from canal side

© 2023 Assessment of biodiversity on aquatic ecosystems in Canada & China

Theme by Anders Noren — Up ↑