Weather: Cloudy, windy with a few rain drops in the afternoon at the conservation site

Today was our 4th day of our field course. In the morning Professor Lougheed gave us a lecture about avian diversity and conservation. The lecture included characteristics of birds, origins of the vertebrate class, and mono-phyly of birds. The most memorable and interesting part for the lecture was discussion of the discovery of a kind of feathered dinosaurs, Yutyrannus huali, found in fossil beds of Liaoning Province, China. The professor also explained how scientists have used the technology related to detecting fossilised evidence of the cells that produce pigments (melanin) to quantify patterns of the plumage of some fossil birds. Last but not least, Steve also mentioned the importance of birds to human society and that the diversity of birds found in wetlands could help us identify the health of ecosystems.

After the lecture, we departed for Hong Hu natural reserve area and had our lunch at one of the local hotels near the reserve. The theme of the dishes was on local ingredients , like fish and lotus. It was by far one of the best meals we’ve had on this trip.

We finally arrived at the reserve in the afternoon, where we were invited to board a motorboat, so that we could evaluate the progress and effectiveness of the conservation program to the ecosystem in the lake. The lake has many interesting aquatic organisms like wild water chestnut (Eleocharis dulcis), wild lotus (Nelumbo nucifera) and many  terns (Family: Sterninae), just some of the species that the government is trying to protect. In Hong Hu, there are about 40km2 of wild lotus in the reserve and we could see different kind of birds inhabiting the lotus (e.g.  little egret, Egretta garzetta), showing the diversity of ecosystem in the reserve and the ability of lotus in enhancing water quality. The class took myriad beautiful pictures during out tour. The section head f the project and our host, Mr. Dung provided us with some basic information on the reserve. The total area of the conservation area is about 162km2 and was once famous for commercial fishing. In 2005, the government proposed a regulation on fishing in the area, only allowing each family to keep 0.1 km2 of pens to raise fish. In 2016, all fishing activities in the reserve were banned and all fishing in the area has now been removed. This of course resulted in a need to address the problem of how to replace lost income for fishers. Originally, they had all lived on boats and received their income through fishing. Their children had no formal education as schools were simply not accessible. It has become a challenge for some now that they have moved to the city or have tried to find other jobs because they lack the necessary skills. Currently, the Chinese government is providing education, training, job, social welfare and a house to those who have been affected. However, these agreements could not solve all the problems that arose. Some fishers may not be able to adapt to such a new environment, and subsidies provided by the government may be insufficient in the long term.

This has led to a debate on whether we should put more consideration toward human well-being or environmental health. In our own opinion, we should probable put more consideration on the environmental side, because environmental conservation and restoration is a long-term process and is necessary for human well-being. If one thinks about the “Tragedy of the Commons” (a term invented by American ecologist Garret Harding), if the government does not interfere, people will not have the incentive or interest to protect the environment, which would ultimately lead to degradation. People will no longer be able to harvest any quality resources from such degraded ecosystems and this would possibly lead to more substantive impacts for the society compared to the ban announced by the government.

Through toady’s investigation and study, we have learned that China have moved forward on natural ecosystem conservation, putting more attention and resources into this domain. The proposed solutions and conservation plans achieving some success. There is always controversy in different environmental projects and stakeholders must work together to obtain the best results. 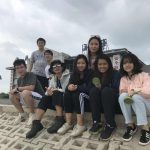 Fig. 5 One of the group picture we took at the pier. 我們在碼頭拍的一張團體照 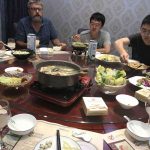 Fig. We were having our lunch. 我們在一富享用午餐. 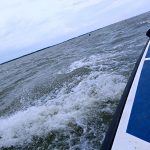 Fig 6. The surface of HongHu. 洪湖的水面. 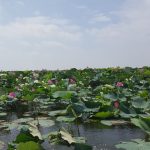 Fig. 2. This the lotus field located a the center of the HongHu conservation area.我們在洪湖保護區看到的一片蓮花林. 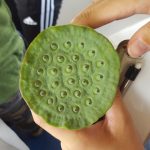 Fig. 1. This is the lotus seen given to us by local lotus harvesters. 這蓮蓬是當地採蓮人給我們的. 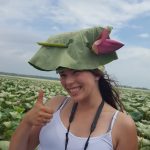 Fig. 3 Local lotus harvesters made a hat with lotus and flower and gave it to Sasha as a gift. 當地採蓮人用荷花和荷葉做子一頂帽子送給 Sasha. 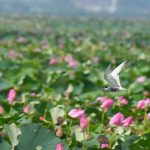 © 2023 Assessment of biodiversity on aquatic ecosystems in Canada & China

Theme by Anders Noren — Up ↑